Extensive biodiversity surveys were carried out on site in the pre-construction phase.

In consultation with National Parks and Wildlife (NPWS), these rare plants were moved / trans-located out of the footprint of the proposed works to other areas of the site in order to protect the rare plant population. The plants will be surveyed and maintained throughout and following completion of the works.

A number of butterfly, macro-moth and micro-moth species were recorded in pre-construction surveys. In order to mitigate the effect of habitat loss on protected species of micro-moths due to construction activities, and in consultation with NPWS, the food plants are being moved out of the footprint of the works and into receptor sites and newly create salt-marsh areas that will be protected during construction. These receptor sites will continue to be monitored during the works.

There are a number of invasive species within the site boundary some of which were determined during pre-planning and confirmed during pre-construction surveys over the last 9 months along with a number of other species not previously recorded. The dual objective for all species is to both prevent the spread of established invasive species during construction (a legal requirement for six of the species), and permanently remove all invasive populations from the working area. The project team are managing invasive species on site in accordance with the invasive Species Management Plan for the project.

Mammal surveys were carried out at pre-planning stage and again in the last 9 months in the pre-construction stage in order to identify mammals living in the site area or potential mammal habitats. The surveys included site walkovers and trail camera surveys. The following species were confirmed as present in and near the site; 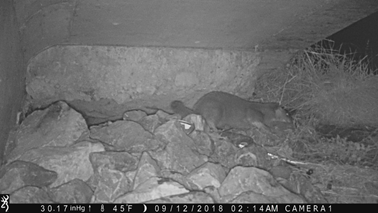 One badger sett was located within the site boundary and it is within the footprint of the works. In order to protect the otters and badgers on site, 3 holts and 1 sett were closed under licence from the NPWS. Further closures will take place and the holts will be reopened once works are completed in the area.

Bat surveys were completed during the activity season summer and early autumn 2018. 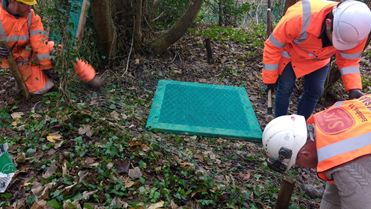 → Hard-blocking of badger sett under licence.

In surveys to date the ecologists have determined that there are suitable trees for red squirrel dreys (nests), some of which are in the road footprint. Further surveys in Summer 2019 will confirm if squirrel are nesting on site.

Water beetles were surveyed in small numbers in tidal lagoons. Some new littoral pools have been created and water beetles trans-located where there is a potential for loss of habitat.

The EIS identified a mixed breeding colony Little Egret and Grey Heron in Pfizer Woodland. Little Egret is listed on Annex I of the Birds Directive; they are green-listed in Ireland Green-listed, species of favourable conservation status. The Grey Heron  is a special conservation interest (SCI) for Cork Harbour SPA and is green-listed in Ireland. Surveys to date have confirmed the presence of Little Egret and surveys are ongoing in this breeding season February-August 2019. John Sisk and Son has set up hoarding around the site compound and an exclusion zone to mitigate any disturbance to the Little Egret during the breeding season.

Curlews, black headed gulls, godwits, moorhen and buzzard have been recorded on site.

Surveys of kingfisher and barn owl are ongoing.

The Environment is very important to the Project Team and due care and diligence are being provided to all aspects of the Environment, including:

The project is bounded by areas of ecological significance, including: 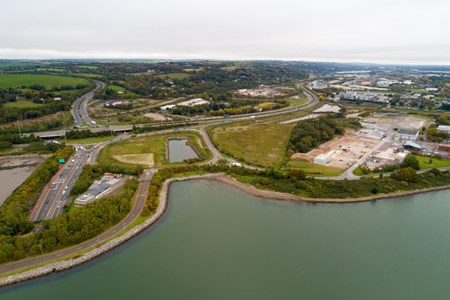 There are a number of protected animal species within or very close to the works, including:

The contractor has undertaken a number of surveys to determine the location of each species on the project and is putting place plans to ensure that these are not affected by the works.

The contractor is liaising with the National Parks and Wildlife Service (NPWS) and Inland Fisheries to ensure that these species are protected during the works.

The contractor is putting in place plans for the management of invasive species.

As part of the Environmental Impact Statement (EIS), Noise and Vibration have been identified as a potential cause of nuisance to neighbouring properties, businesses and the travelling public. To minimise this the contractor will be following the recommendations of the EIS, using measures such as the installation of Noise and Vibration monitors at key locations around the site.

Dust can be a nuisance to people in the vicinity of the project. The contractor is putting place plans and work methodologies to ensure that dust from the project is minimised. There will be Dust monitoring in place throughout the site to provide feedback to the Contractor, so that these working methods can be adjusted if required.

One of the objectives of the project is to segregate and recycle the majority of waste being generated on site. Where material is required to be disposed to a licenced facility, this will be carried out by a licenced waste management company.

As a minimum, the following are the targets for the recovery of waste on the project:

The benefits realised as a result of this plan will be:

The introduction of this ‘best environmental practice’ across the project reduces the potential impact on the local community.

Cultural heritage is an important element of the environment that merits protection. While there are no known designated archaeological sites within the project area, investigations are underway to assess the potential for buried sites and to record features of built heritage significance.

The Contractor will be complying with relevant statutory requirements to ensure  the protection of cultural heritage in the course of the works.

Life cycle carbon emissions were assessed for the scheme as part of the preliminary design process which determined the embodied and operational carbon impact of the proposed Dunkettle Interchange improvements. Life cycle emissions were calculated over a thirty year period and are compared against the existing highway arrangement. The scheme delivers a net reduction in carbon emissions over the life of the scheme (construction, operation and maintenance) through the reduction in traffic emissions resulting from the improved traffic flow through the interchange