In developing the Dunkettle Interchange Upgrade scheme, TII have been aware of the vision for enhanced cycling and pedestrian infrastructure, outlined in national and local policy, e.g.:

The route of shared use Pedestrian and Cycle facilities through the new interchange is outlined in the drawings below. 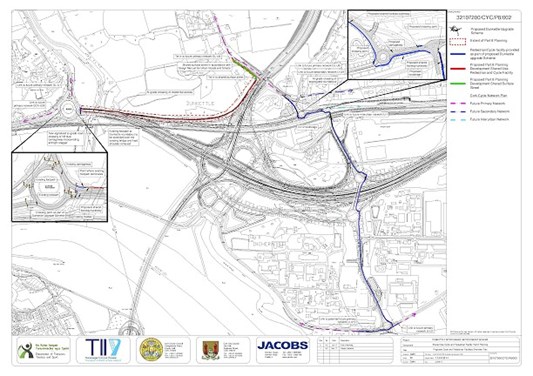 These cycle & pedestrian routes are important facilitators of the Cork Cycle Network Plan, with Dunkettle acting as a key hub linking the City cycle routes with those of Glounthaune and Little island.

As the new sections of the Dunkettle Interchange are opened, these will help serve the new bus routes. During construction at least 2 lanes in all directions will be maintained to aid public and private bus services.